You may not realize it, but steel wire ropes are all around us. They are used in bridges, elevators and locks. In cranes and in various industrial applications. What are the origins of this versatile product? Let’s take a look at the rich history of the steel wire rope.

The history of the steel wire ropes goes way back, because rope is considered its predecessor. As early as prehistoric times, ropes were made from plant fibers, skin and hair. In 1250, the Incas used rope to build a bridge of suspension cables. And in ancient Egypt, rope acted as a lifting device in the construction of pyramids.

As of the nineteenth century, iron chains became a good alternative. The mining industry, among others, made eager use of them. Mining engineer Julius Albert foresaw a risk. Although chains had a high breaking load, they didn’t have parallel strans like wire ropes. With wire ropes, the break of one wire was absorbed by the other wires, but this was not the case with chains. As a result, fatigue fractures of chains were a real danger in the mining industry as the entire chain would fail with only one facture.

In 1824, Albert focused his efforts on this issue and seeks a way to combine the advantages of wire ropes and chains. He builds a tensile machine to test the fatigue of chains. After numerous tests, he concluded that chains were inadequate: they quickly showed signs of fatigue and are not safe enough.

In 1834, Albert manufactured the first successful steel wire rope. He used the weaving technique that was also used to make rope. He struck the rope with three strands, each consisting of four wires. The result was a steel wire rope with a diameter of 19 millimeters and a length of 600 meters. The great advantage of this steel wire rope: if one strand breaks, the other strands will absorb the blow.

On 23 July 1834, the first steel wire rope using this technique was used in the Caroline quarry in Clausthal, Germany. This quarry was some 464 meters deep.

Although experts are continually taking the steel wire rope to the next level, wire breaks remain a nasty issue. In 1884, Thomas Seale came up with a new construction, which consisted of sturdy outer wires and an equal number of inner wires with a smaller diameter. This made the wire rope more flexible. Seale also ensured that the wires are parallel to each other, preventing wire crossings.

Nevertheless, the Seale construction ultimately did not prove to be the dream solution for wire breakage. The large outer wires made the wire rope less flexible and the steel wire rope still became quickly fatigued. In response, James B. Stone reduced the diameter of the outer wires. He filled the space created between the outer wires with smaller wires. The filler wire rope construction was a reality. This technique is still widely used today.

During the nineteenth century, another construction was added: the Warrington construction. This consists of six strands from one core wire, with six wires in the first layer around it. In the grooves of the six thick wires in the second layer are another six wires. The second layer thus consists of 12 threads. The large number of threads in the outer layer increases the flexibility. A disadvantage is that the thin wires on the outside reduce the resistance to destruction and corrosion. Also, the construction is relatively unstable.

Materials: from iron to steel

Of course, the search for higher-quality materials continued. In 1855, Henry Bessemer received a patent for the so-called “bessemer process”: a production method for steel from pig iron. From 1865 onwards, it was possible to mass produce steel. The steel wire ropes that were manufactured from this steel mass had much greater tensile strength than iron rope wires. In 1883, steel wire ropes were used for the first time in a suspension bridge, and not the least either: the Brooklyn Bridge in New York City.

The result: a steel wire rope that is more resistant to fatigue, has a better recovery capacity (after bending) and is more flexible (in an unloaded state). A solution from which we continue to benefit today. 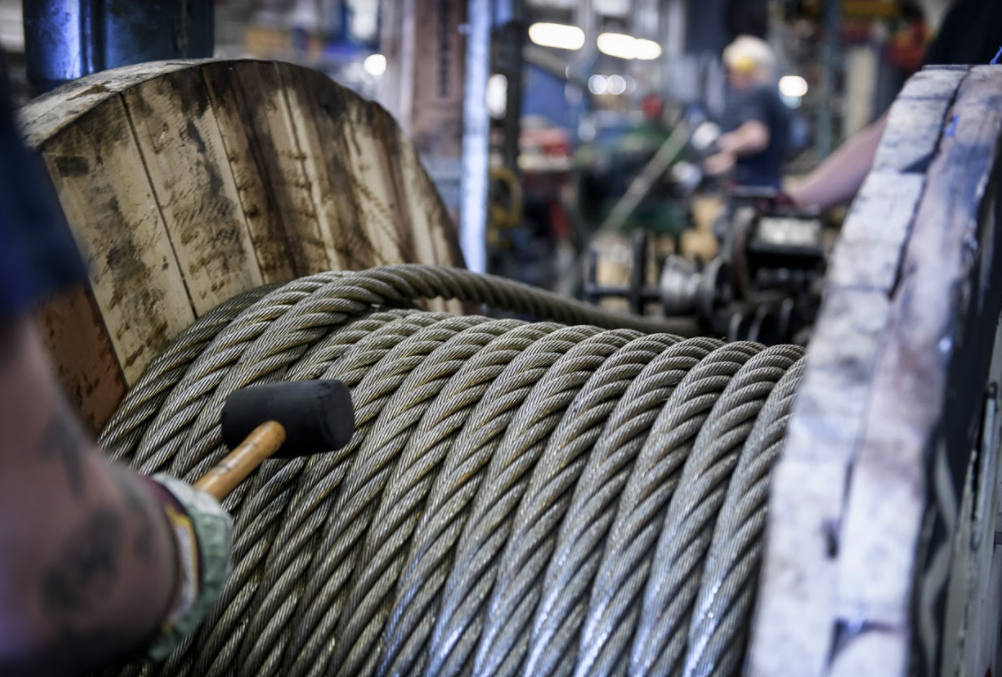 Discover how Mennens can support you:

More than 100 years of expertise and experience have lead Mennens to be marketleader in the Benelux. We have a complete range of activities: supply, install and assemble, inspect and certify, repair and maintain, inform and train.