Since the beginning of the last century, MRT systems were built to force high magnetic field in metallic rope, used in the cableway sector. The goal was to completely saturate ropes in all their cross sections. The magnetic flux in the inner part of the rope guarantees the ability of the device of checking inner defects.

For low magnetism devices, where the magnetic flux moves only on the surface, there is no evidence of internal defects. Without magnetic flux in the internal part of the rope there will be no defects detection, which is caused by flux variation (in presence of defects the flux varies, no flux🡪 no flux variations).

Anyway, low magnetic field devices for some applications could be still advantageous. Let us have a deeper look at both technologies.

Devices working in different points of the magnetization curve

In these devices, the magnetic structure leads the rope to reach high field values. It is important to note that the new EN12927 regulation sets a threshold for rope saturation, the magneto induction should be higher than 1.9 T and lower than 2.3 T. These two limits lead the system to work near the knee of the magnetization curve of the rope.

As it is observable on the picture in the rifht, when the magnetization level is low the rope will work under situation 1. A very low magnetic flux will pass only on the surface of the rope, where the linearity of the curve will make easier external broken wires detections (thanks to the high magnetic permeability of iron). This means that when a broken wire appears, the difference between the permeability of the iron (rope) and the permeability of the air (defect) is high and well notable. In fact, high peaks characterized zone 1.

Of course, working in this area will not allow internal defects detections, because the magnetic flux does not penetrate the rope. 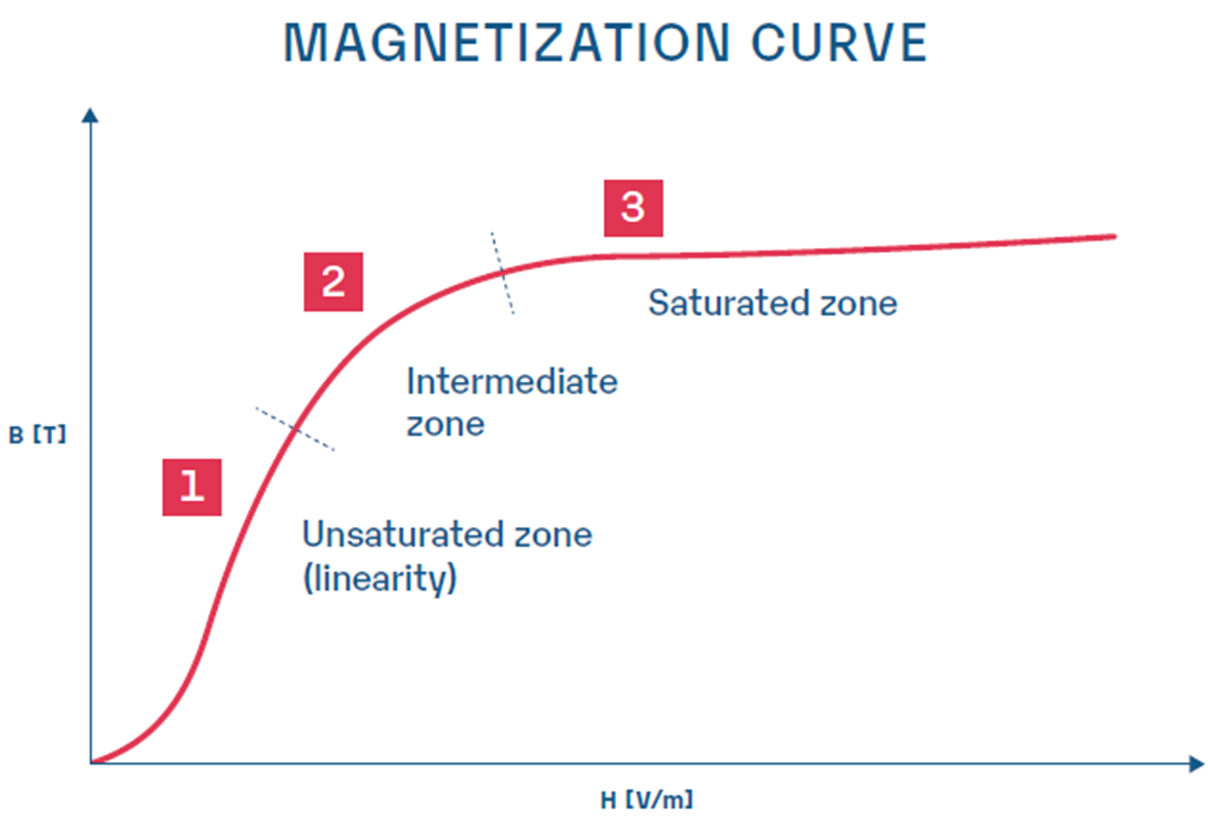 Standard MRT systems work in zone 2 (magnetic knee) where ropes are perfectly saturated, and the magnetic permeability is still different from the air one (in zone 3 this difference is much lower). This is the perfect zone to operate, the internal defects are visible, and the peaks amplitude is high enough to be recognized.

There is also another kind of system, that works with different principle: the residual magnetism. A big magnetic field is forced inside the rope with a tool called “magnetizer”. After, a second tool, the detector moves on the rope and its sensors detect the various damages. This inspection is made of two steps. In the first part, the rope is fully magnetized, but when the magnetizer moves to another rope portion, the main magnetic flux disappear. Only a residual magnetism remains which is taken over by the detector, checking for broken wires. Those systems are easily recognizable due to their lightness (only the detector) and their plastic components. Those systems cannot detect internal broken wires because the residual magnetic flux is too weak to give sensible variations. (Due to the strand geometry, it is not possible to establish the difference between the noise and the defect). All the tests done by residual magnetization tools failed to pass the EN12927 certification.

More than 100 years of expertise and experience have lead Mennens to be marketleader in the Benelux. We have a complete range of activities: supply, install and assemble, inspect and certify, repair and maintain, inform and train.